The Heinlein Prize Trust is sponsoring local STEM teachers at the ‪#‎NewSpace16‬ conference this week in Seattle. Welcomes Redmond Middle School, Applied Precision Lab & The Museum of Flight. "Pay it forward," as Robert Heinlein would say. .

Jeff Bezos on Tuesday receive a prestigious award in the emerging space industry for his “historic firsts” and reusability in spaceflight. The Amazon (Nasdaq: AMZN) founder’s Kent-based company Blue Origin last year completed the first successful soft landing of a rocket and developed a reusable liquid hydrogen and liquid oxygen engine, which is used in the company’s New Shepard spacecraft. The Heinlein Prize – named for American science fiction author Robert A. Heinlein – aw

SEATTLE — Jeff Bezos, whose commercial space company Blue Origin recently completed another test flight of its New Shepard reusable suborbital vehicle, is the latest winner of the Heinlein Prize for commercial space achievements, previously won by an archrival. The Heinlein Prize Trust announced June 21 that Bezos will be the third recipient of the prize, established in the name of the late science fiction author Robert A. Heinlein, for his efforts to develop suborbital and o

The entrepreneur took home the award for Blue Origin’s work on reusability in space exploration. Jeff Bezos is taking home a prestigious industry award Tuesday, but not for Amazon.com. The entrepreneur has been awarded the Heinlein Prize for his work at Blue Origin on reusability in space exploration. Bezos is known for his enthusiasm for all things space, especially via the work at his Kent-based company. Blue Origin launched its New Shepard rocket, designed to eventually ca 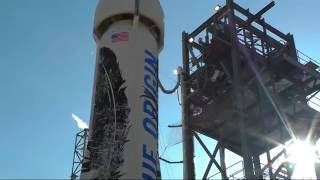 Amazon’s billionaire founder, Jeff Bezos, has won the prestigious Heinlein Prize for his efforts to advance space commercialization at another company he founded, Blue Origin. Bezos follows in the footsteps of SpaceX founder Elon Musk and Peter Diamandis, who played a lead role in creating the $10 million Ansari X Prize for private spaceflight. Diamandis was the first award-winner in 2006, and Musk was honored in 2011. The prize serves as a tribute to the late science-fiction

Have Space Suit Will Travel Graphic Novel is Funded!

The Have Space Suit Will Travel (HSSWT) KickStarter campaign has officially achieved it's goal of raising $9,000 to completely fund the production and distribution of the 50+ page graphic novel. And in record time. The project still has 30+ days left. Campaign co-chairman Rob Lazaro said; "Our plan now is to use the remaining days of the campaign to try to raise additional funds through “Stretch Goals” to potentially fund additional graphic novel adaptations in the near futu

For Blue Origin, Jeff Bezos gets Heinlein Prize and a sword – then gives away $250K

Have Space Suit Will Travel Graphic Novel is Funded!

HPT offers our Sincerest Condolences to the Family of Rona Ramon, Widow of Israel’s First Astronaut

For Blue Origin, Jeff Bezos gets Heinlein Prize and a sword – then gives away $250K